Kicking off the new year with a bang, London’s The Gallery presents Go On Air, hosted by Giuseppe Ottaviani on Friday January 30th 2015. This hallmark event includes for the first time an exclusive DJ set from the host Giuseppe Ottaviani, alongside special guests Sean Tyas, Solarstone, and Sied Van Riel.

Go On Air primarily launched as a radio show in 2009, rising from strength to strength before partnering with Blackhole Recordings to form the Go On Air Recordings label in February 2014. On the launch of the new label, Arny Bink, MD of Black Hole Recordings said: “Giuseppe is one of the most capable, energetic and tuned-in producer/DJs out there. Bringing those talents to the realm of A&R is a very natural next step for him. We are tremendously excited by the first releases he has signed – we see the very brightest of futures ahead for ‘Go On Air’.”

This latest endeavour in to Go On Air events stays true to the brands community roots, streaming live HD video as well as broadcasting on DIFM for six hours from midnight to existing fans throughout the world, with supporting conversation on twitter through @DIRadio, @GOOnAirRec, and hashtag #GOOnAir_London. 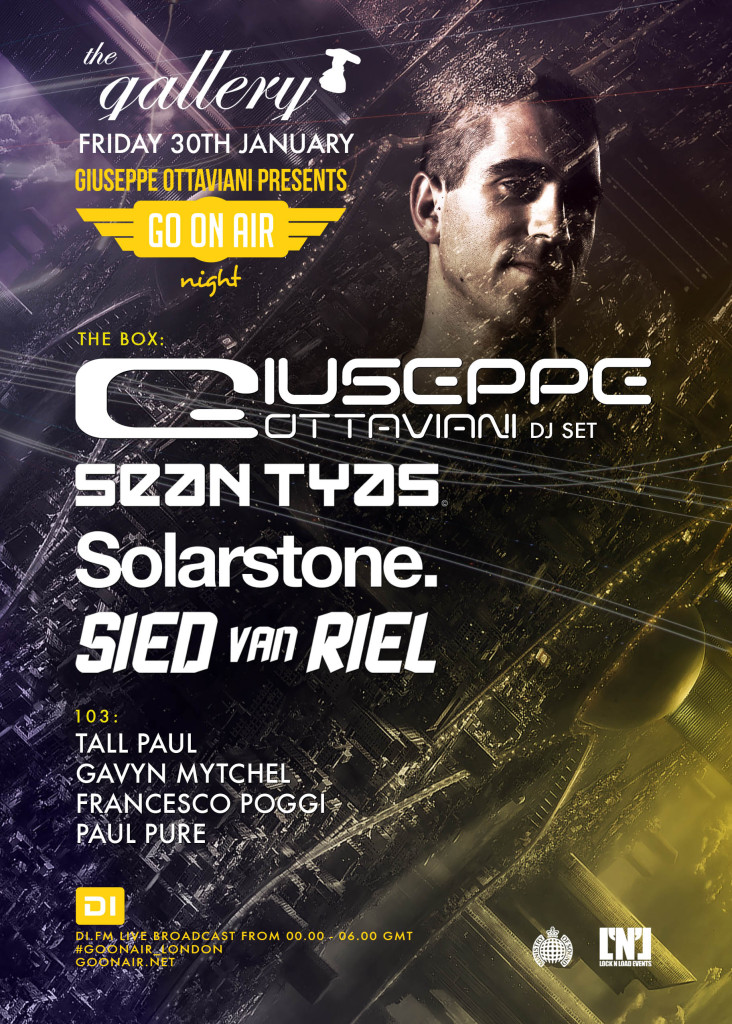 From the air to the dance floor, the Go On Air brand continues to introduce the worlds hottest, newest and most gifted trance exporters with the objective of capturing GOA’s sonic essence. The Go On Air event provides trance lovers with a uniquely immersive live experience, taking them on an engrossing heart-felt journey through a multitudinous variation of trance music. Ottaviani says: “the Go On Air night is a chance for everyone to see and hear me as never before, I can express myself as a DJ by performing a wide range of music, not only my own but also music from the label, and tracks I love to play.”

Friday’s line-up also includes Beatport’s “One to Watch”, Sean Tyas. The man behind the Pure Trance movement and several notable labels, Solarstone – and as if that wasn’t enough – Sied Van Riel, hailed by Tiësto as “the hottest producer around”.

Tickets for this monumental event can be purchased HERE