‘Heal This Empty Heart’ is ready to heal those January blues 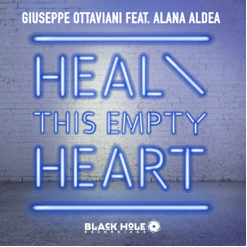 A New Year, and another new shade of ‘Magenta’. Following his trail of club floor heat-seekers over the last 8 months – all spawned from his astonishing debut album ‘Magenta’, Giuseppe kicks off 2014 in spirited form. For his next single, Ottaviani has joined forces with fast emerging Australian singer/songwriter chanteuse Alana Aldea. Having previously sung vocals for Cosmic Gate, Max Graham and Aaron Camz’s productions (to name but a few), she now brings her torch-song tones to Giuseppe’s latest. ‘Heal This Empty Heart’ is ready to heal those January blues!

On his new Extended Mix, Giuseppe coverts his original ‘Magenta’ vision into a wholly fleshed out main-stage mainstay. Hinged around the fulcrum of Alana soulfully burning lyrics and the aching lament of her voice, his perfectly judged production drops a near instant 2014 classic into the laps of trance lovers.

Backed by rainforest FX and raincry harmonies, John O’Callaghan’s remix steals ‘Heal This Empty Heart’ deeper into the night, upping its tempo and intensifying its bass. Into the break he brings the strings and allows Alana full song to reign on his Vocal Mix (which was chosen as Tune Of The Week in episode 648 of Armin van Buuren’s radio show A State Of Trance!), whilst the energetic production assumes centrestage on the Dub.

Leaving an equally substantial floor-print, France’s Alex Wackii chops, echoes and pans the vocals vivaciously on his version. Drawing the track into the long sweeping synths and slight electro highlights, he polishes the peak of the drop with airborne synths.

A mix for all tastes and all times of the night (or day).